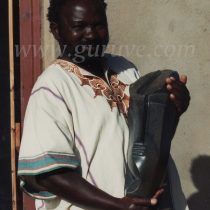 This striking sculpture is by Nicholas Mukomberanwa, one of the most sought-after names in the Shona sculpture movement. Nicholas was a tremendously gifted sculptor; his artworks are accomplished and sophisticated. Typically, they are stylised human figures or faces, with lines reminiscent (to the Western viewer) of Picasso or Art Deco aesthetics.

Nicholas was not a prolific artist, and as a result his pieces do not come onto the open market very often.

This piece is a fantastic example of Nicholas’ work at the peak of his most popular period. As such, it represents a great opportunity for a dedicated collector of important Shona sculptures to add a substantial Nicholas to their collection.

Originally, this piece was exhibited at Gimpel Fils Gallery in Mayfair, central London. It was bought by a private collector and remained in his collection until his death a few years ago, following which it was acquired by the current owner. The piece comes with a copy of the original gallery invoice from 1993.

NB We have blurred Nicholas’ distinctive signature for privacy purposes. Prospective buyers are welcome to contact us to request to see the unedited photos.