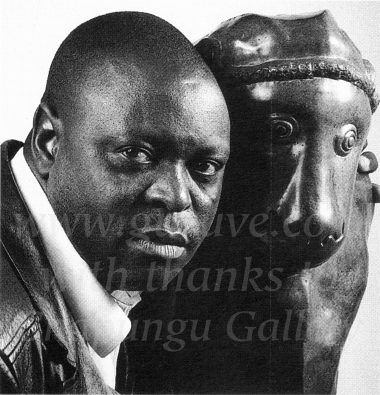 John grew up in Nyanga in the Eastern Highlands of Zimbabwe. When he left school, he turned to his relative Joram Mariga for instruction in the art of carving, having already shown promise in woodcarving at school. Mariga was the lynchpin of a group of artists who quarried their own stone and sculpted it. Soon after joining this loose association of sculptors, John Takawira showed one of his pieces to the National Gallery (NGZ) in Salisbury (now Harare). The Director, Frank McEwen, was enthusiastic and as early as 1963 the Annual Exhibition at NGZ included some of John’s work.

In 1969, John joined McEwen’s newly-established workshop at Vukutu in the Eastern Highlands, where he was to stay until it disbanded in 1976. Out in the sango (bush), the artists’ work was inspired by nature and by dreams.

Takawira’s work increasingly used very rough, natural weathered textures with only the face given a smooth finish. He leant heavily on his dreams for inspiration – a 1981 exhibition was entitled ‘My Dreams’ – in which the baboon (respected for its shrewdness), the owl (wisdom) and the bateleur eagle (the messenger between man and the ancestor spirits) featured prominently. The size of his work also increased; a reflection perhaps of his feeling that size dramatizes emotional impact and that boulder-like sculptures would radiate power and strength.

We also have a few pieces of John’s work that are not yet on the web gallery. If you are interested, please contact us and we can send you photos.