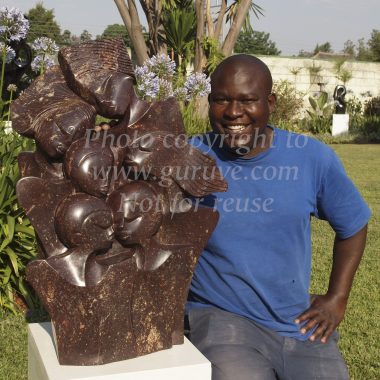 Lovemore Bonjisi was born in January 1985 in Ruwa, a small town just east of Zimbabwe’s capital Harare. He is the youngest in a large family, many of whom are stone sculptors.

Lovemore was taught to sculpt by his brother Lameck Bonjisi (now deceased), who was a well-known sculptor.

Lovemore cites as his inspiration the late, great Zimbabwean sculptor Nicholas Mukomberanwa, who was Lameck’s teacher and mentor. Nicholas’ sculptures have stylised faces and cubist forms, and one can see this influence filtering down through the generations.

Many galleries worldwide have exhibited Lovemore’s work, including: