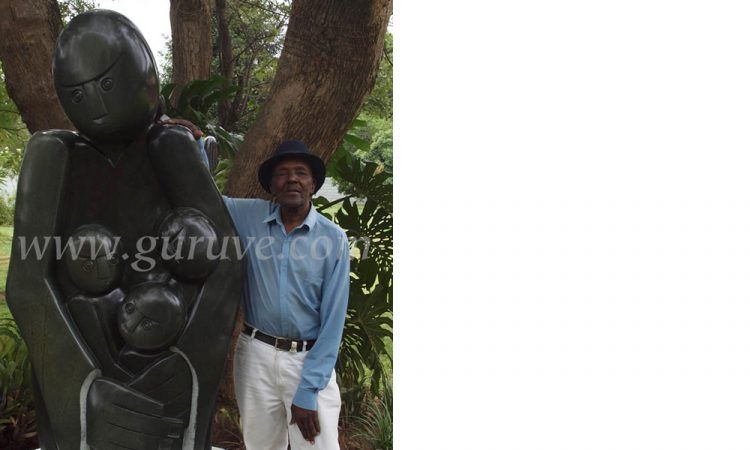 Edward Chiwawa with his sculpture ‘Protective Mother’, photographed at the Shona Sculpture Gallery in 2013

It is with great sadness that we have to announce that senior artist Edward Chiwawa passed away last night.

There are only a handful of sculptors left in Zimbabwe who are part of that first group to achieve international recognition, the so-called ‘first generation’ of Shona sculptors. That select group has lost one of its great names overnight, and the Shona sculpture community is in mourning today.

We remember Edward as a great family man. With his beloved wife Shirley, he had thirteen children (yes, thirteen!). He had over forty grandchildren and said he “had lost count of” the number of great-grandchildren. So he is truly the head of a dynasty, including a number of talented sculptors such as Vengai Chiwawa and MacLeod Chiwawa.

He is pictured above with a sculpture celebrating the fierce protective love a mother has for her children, inspired by his late wife. He created this piece in 2013, as a special commission for us on the theme of ‘protection’, so that we could place guardian sculptures in the garden of our gallery-to-be in Harare, now open as the Shona Sculpture Gallery.

Edward was born long enough ago that his birth was not formally documented. When we asked him how old he was, there was much discussion! He remembered enrolling at a church school, he thought in 1932 at the age of 16, which would place his date of birth at 1916 making him approximately 105 when he died. Although life expectancy at birth in Zimbabwe is depressing low (somewhere around 40 years old, I think), this reflects high mortality in the under-fives and also amongst young adults due to HIV infection. We’ve met many sprightly elderly Zimbabweans – the traditional diet is pretty healthy, low in fat and with lots of leafy greens, if generally with far too much salt! People are often very active well into old age. Edward was no exception here, as his sons often bemoaned the fact that he refused to slow down, even when they pressed him to take things a bit easier.

Last year, we discovered that Edward was overseeing the construction of a new house in his rural area, or kumusha, as his retirement home. He has been splitting his time between overseeing building work out in Guruve and staying with family in the Waterfalls district of Harare. So it is bittersweet indeed that as he finally showed signs of listening to his concerned sons and putting his feet up a little more often, he has now passed away and won’t be able to enjoy a peaceful last few years in the quiet of his rural home.

RIP Sekuru* Edward Chiwawa and condolences to all your family.

* Sekuru in Shona literally translates as ‘grandfather’, but is also used generally as a term of respect for any senior old man and also as a greeting. A sekuru is a person that younger members of society go to for advice, and he and his peers settle disputes amongst the local community. 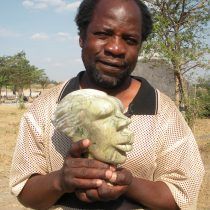 Arthur is a well-known ‘second-generation’ artist with a long association with Harare’s Chapungu Gallery. He is best known for imaginative mixed media works.