Thought I Was Protected 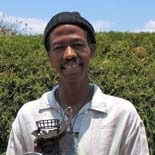 This work is a response to Mugabe’s 2005 ‘clean-up’ operation in Zimbabwe, where homes and businesses were bulldozed and many people were forced to return to rural areas. It was a terrible time for many Zimbabweans.

The covering over the face represents

“the state, which we think will protect us but has turned out to be something we need protection from.”

The spears are the weaponry of the state, used against the people.

An incisive comment on the repressive regime in charge of Danny’s home of Zimbabwe, which increasingly existed to serve itself rather than its people, and shows no sign of relinquishing power despite the departure of its figurehead Mugabe.