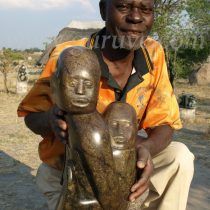 “A bird spirit standing on a medium, a middle-aged man. It’s a bird because it flies between the spirits and the medium. It is a bateleur eagle [chapungu], like the one Frank McEwen had.”

Frank McEwen was the very influential first director of the National Gallery in Zimbabwe. He had a bateleur eagle called Chapungu that he adored. Sylvester told of how it was neglected by the staff when Frank went away once, and how devastated he was to return and find it had died.

This is a very substantial piece by the greatest living Zimbabwean sculptor, who represented Zimbabwe at the Venice Biennale in 2017.

The two holes in the lower section are remnants of the mining process. We estimate the weight to be approximately 400kg.