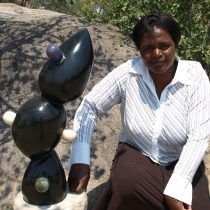 Inspired by the water molecule – two small hydrogen atoms are bonded to each large oxygen atom in an original creation using a variety of different stones.

Agnes is at the forefront of women’s sculpture in Zimbabwe. She is keen to push the boundaries of what has traditionally been a male-dominated role. Female Zimbabwean sculptors in previous decades have concentrated on expressing a woman’s situation in traditional Shona culture (Colleen Madamombe would be the most famous example).

By contrast, Agnes forges ahead using the very male sphere of science and technology as her inspiration for some ground-breaking experimental work, and feels no compulsion to worry about the fact that she’s a woman and thereby create artificial constraints on her own work.