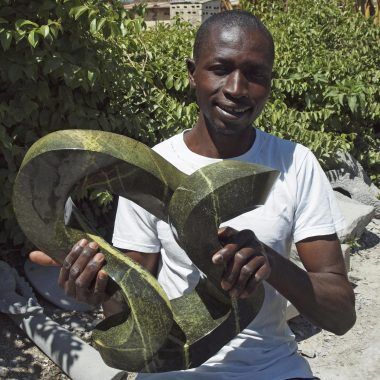 Charles Kowo was born in 1980 in Mutoko in north-eastern Zimbabwe, a stunning mountainous region where purple lepidolite and the serpentine stone known as leopard rock are found.

When his father died in 1992, his mother moved back to her parents in Guruve in northern Zimbabwe, taking the eight children with her.

The area around Guruve has some very interesting geology, and there are a number of stone sculptors working there. Charles met Obert Marime, an experienced sculptor who created abstract pieces. Charles was very impressed by his work and his interest in this art form grew. He asked Obert to teach him to sculpt. Obert very kindly agreed, so from 2002-2005 Charles stayed with Obert and worked as his assistant and learned the basic techniques of sculpting.

In 2005, with Obert’s encouragement, Charles started to work on his own pieces. Although he was now creating his own work, Charles stayed with Obert until 2012 when Charles moved closer to Harare. The benefit of this move was a flow of customers coming through on their way to meet various sculptors and to visit the local serpentine mines. With cheap, easily accessible raw materials and a growing customer base, Charles became an established artist.

Charles Kowo is an extremely talented artist, and all his wonderful pieces have sold. However, we have a super new collection for 2022 which will be added to the web gallery very soon. Watch this space…!